Many Ways to Give!

Or if you prefer

Long time supporter of the Dearborn Symphony, Virginia Horton passed away on September 4, 2021.

Born in Detroit, August 3, 1923, to Leo and Dorris Miller, she was a voracious reader and had a full and wonderful life pursuing her passions. Whether it be spending time at her cottage on Torch Lake; attending Wimbledon, the US and French Open tennis, Indy 500, and Kentucky Derby; living in England for 5 years while her husband, Emmett, worked there for Ford Motor Company; browsing for antiques; traveling to Provence with her daughters; expounding on her knowledge of tea by giving tea talks and collecting antiques relating to tea; supporting the local arts, the Dearborn Symphony, and Questers; she lived life to the fullest. Survived by daughters, Janet (the late Paul Wright) and Kathryn, daughter-in-law Diane, grandson Troy, and numerous nieces, nephews, grandnieces, and grandnephews. She was preceded in death by her husband of over 50 years, Emmett, son Chris, and great grandson, Christopher. There will be no memorial service, but we would like everyone to feel free to remember her in their own way, or to consider a contribution to Friends of Dearborn Symphony (formerly WADOS), Dearborn Symphony Orchestra, P. O. Box 2063, Dearborn, MI 48123. She will be buried at Lakeside Cemetery on Torch Lake next to Emmet.

THANK YOU to all who purchased Diamond Raffle tickets during our Diamond Jubilee. Congratulations to our winner and may the rest of you enjoy your shimmering CZ. Your participation help raise funds to support your Dearborn Symphony.

John Dolega, of Dearborn, passed away on June 26, 2021 at the age of 100. Beloved husband of Eleanor for 67 years. Loving father of Sharon Dolega (Don Tujaka) and Jean Dolega (Don Lauter). He also leaves behind many dear family members and friends. Services will be private. Donations in John’s name can be made to the Capuchin Soup Kitchen.

The following was printed in the Dearborn Times-Herald in honor of John’s 100th birthday.

During his birthday drive-by celebration, Dolega was greeted by members of the Police and Fire departments, the Dearborn Legion Riders of Post 364, Dearborn Allied War Veterans and salutations from elected officials representing Dearborn.

Dolega’s wife of 66 years, Elenor, also was by his side as he was honored. The couple have two children together, Sharon and Jean.

When told about his Sept. 1 birthday celebration, Dolega jokingly responded by saying, “What’s the big deal?” A resident of Dearborn for 66 years, he is known in the city because of his community involvement and former law practice.

Dolega left school to join the U.S. Navy and fight in World War II. He then went to Detroit College of Law, graduating with his law degree, and practiced law in Dearborn with an office on Monroe. The State Bar of Michigan honored him with a certificate for 50 years of practicing law.

Some of Dolega’s activities include serving as a legal advisor for the Dearborn Exchange Club for 47 years and as artistic director of the Dearborn Symphony Orchestra.

In 1981, Dolega was honored with the Member of the Year Award by the Exchange Club. In 1989 he served as club president.

His time with the symphony was spent serving on the artistic committee which put together the musical programs for each year. Additionally, he advised the symphony board on issues that needed attention and continued providing legal advice after he retired from the board.

He is known as a committed family man and active in the community.

Stan Nycek, a friend of Dolega who knows him from the Exchange Club and Dearborn Symphony, said the work Dolega did puts him as a pillar of outstanding service to the city of Dearborn.

“John is a truly outstanding individual who gave his service to the Exchange Club of Dearborn for many years,” Nycek said. “On a personal level, as long as I have been a member of the Exchange Club, I have developed a close rapport with John Dolega. His keen mind and many interests made it a pleasure to talk with him at our Exchange Club’s luncheons and events.”

The Dearborn Orchestral Society doing business as the Dearborn Symphony has received the GuideStar transparency seal. Click here for our GuideStar Profile

Dick retired from Ford Motor Company after 34 years of service. He was an engineer specialist dealing with NVH (noise, vibration, and harshness) and worked often in the sound quality labs. He was one of the key engineers to work on the exhaust tuning in the Ford Mustang, especially on the Bullitt model.

In his free time, Dick was a master photographer, both behind the camera and in the dark room. He took all of the photos for the family, was the master editor of the family albums/videos, and snapped most of the notable shots for the Sing Out Dearborn and Sing Out Asia groups. Dick also had his pilot’s license and his own kit plane. This enabled him to also snap thousands of aerial photos throughout his travels.

Dick is remembered by his family as a remarkable driver and pilot, starting with the family go-cart as children and through the years as he would procure a variety of fast cars, including his Boss 302. They also fondly recall the times that Dick would invite them on thrill rides in his plane.

Dick comes from a musical family. He was a talented tuba player and he played for 20 years in the Dearborn Symphony as the sole tuba in the ensemble.

Dick was a Gift of Life tissue donor offering to improve the life of somebody who is sick or injured.

He will be sorely missed and fondly remembered by those who knew him.

Dearborn Symphony’s Principal Clarinet, Nickolas Hamblin, has been with the orchestra for two years.

He began playing his instrument at the age of 10 and chose the clarinet because his grandfather played one in the local polka band in Wyandotte, Michigan. His grandfather even had an extra one for Nickolas to use for fifth grade band.

Having just moved to Ann Arbor, he has been spending time setting up his new apartment, attending some online classes and has been having a lot of fun cooking!

Neal Campbell is the Principal Tuba for the Dearborn Symphony and has been playing with us for ten years.  He picked up the Tuba at age 13!

Having been on the faculty at universities in Michigan and Ohio, The Blue Lakes Fine Arts Camp, and The University of Michigan All-State Program, Neal has been teaching this year from his home in Southfield, Michigan. He’s also been supporting his kids with “virtual everything”! 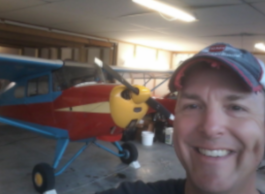 Neal is a certified flight instructor and commercial pilot. 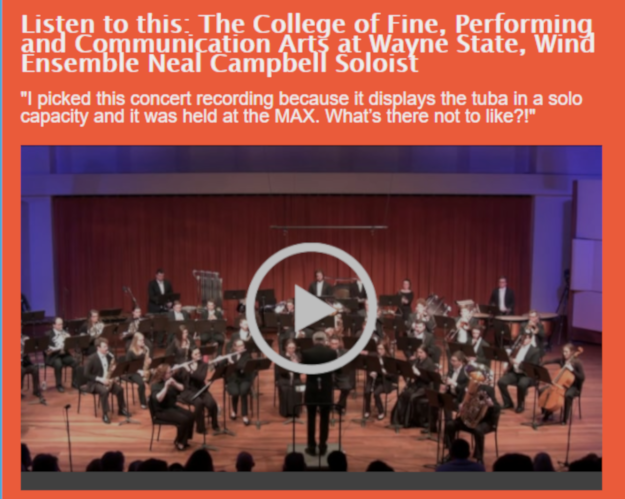 ____________________
The Dearborn Symphony has launched an information series, “Players in Profile” prepared by our Music Director, Steven Jarvi, featuring orchestra members at their homes, a short profile interview and a YouTube link to a performance with the player’s thoughts on what to listen for from a personal or favorite performance. Click here for Players in Profile

2023 Program Book with information about the February 3 concert